News Clipping: Looking ahead to a brighter future 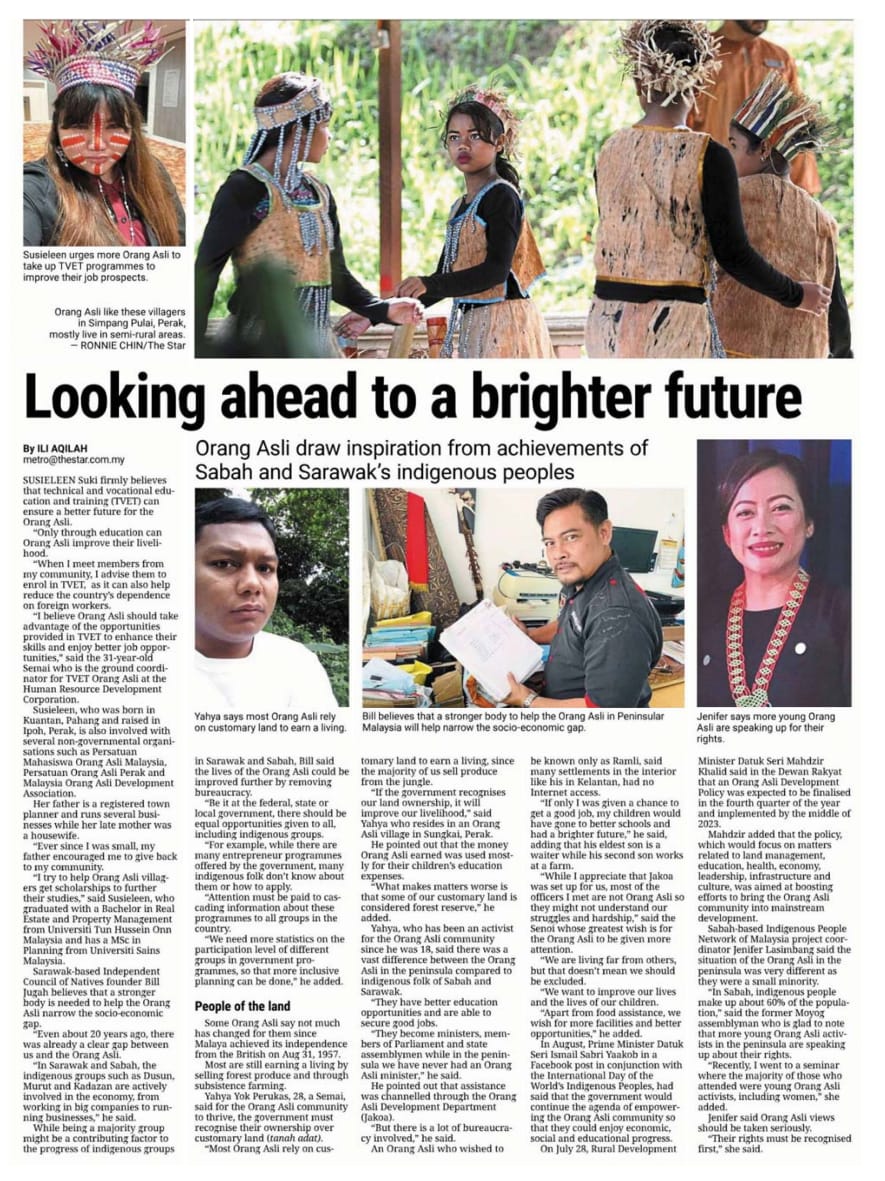 Orang Asli draw inspiration from achievements of Sabah and Sarawak’s indigenous peoples SUSIELEEN Suki firmly believes that technical and vocational education and training (TVET) can ensure a better future for the Orang Ash.

“Only through education can Orang Asli improve their livelihood.

“When I meet members from my community, I advise them to enrol in TVET, as it can also help reduce the country’s dependence on foreign workers.

“I believe Orang Asli should take advantage of the opportunities provided in TVET to enhance their skills and enjoy better job opportunities,” said the 31-year-old Semai who is the ground coordinator for TVET Orang Asli at the Human Resource Development Corporation.

Her father is a registered town planner and runs several businesses while her late mother was a housewife.

“Ever since I was small, my father encouraged me to give back to my community.

“I try to help Orang Asli villagers get scholarships to further their studies,” said Susieleen, who graduated with a Bachelor in Real Estate and Property Management from Universiti Tun Hussein Onn Malaysia and has a MSc in Planning from Universiti Sains Malaysia.

“Even about 20 years ago, there was already a clear gap between us and the Orang Asli.

“In Sarawak and Sabah, the indigenous groups such as Dusun, Murut and Kadazan are actively involved in the economy, from working in big companies to running businesses,” he said.

While being a majority group might be a contributing factor to the progress of indigenous groups in Sarawak and Sabah, Bill said the lives of the Orang Asli could be improved further by removing bureaucracy.

“Be it at the federal, state or local government, there should be equal opportunities given to all, including indigenous groups.

“For example, while there are many entrepreneur programmes offered by the government, many indigenous folk don’t know about them or how to apply.

“Attention must be paid to cascading information about these programmes to all groups in the country.

“We need more statistics on the participation level of different groups in government programmes, so that more inclusive planning can be done,” he added.

People of the land

Some Orang Asli say not much has changed for them since Malaya achieved its independence from the British on Aug 31,1957.

Most are still earning a living by selling forest produce and through subsistence farming.

Yahya Yok Perukas, 28, a Semai, said for the Orang Asli community to thrive, the government must recognise their ownership over customary land (tanah adat).

“Most Orang Asli rely on cus- tomary land to earn a living, since the majority of us sell produce from the jungle.

“If the government recognises our land ownership, it will improve our livelihood,” said Yahya who resides in an Orang Asli village in Sungkai, Perak.

He pointed out that the money Orang Asli earned was used mostly for their children’s education expenses.

“What makes matters worse is that some of our customary land is considered forest reserve,” he added.

Yahya, who has been an activist for the Orang Asli community since he was 18, said there was a vast difference between the Orang Asli in the peninsula compared to indigenous folk of Sabah and Sarawak.

“They have better education opportunities and are able to secure good jobs.

“They become ministers, members of Parliament and state assemblymen while in the peninsula we have never had an Orang Asli minister,” he said.

He pointed out that assistance was channelled through the Orang Asli Development Department (Jakoa).

“But there is a lot of bureaucracy involved,” he said. An Orang Asli who wished to be known only as Ramli, said many settlements in the interior like his in Kelantan, had no Internet access.

“If only I was given a chance to get a good job, my children would have gone to better schools and had a brighter future,” he said, adding that his eldest son is a waiter while his second son works at a farm.

“While I appreciate that Jakoa was set up for us, most of the officers I met are not Orang Ash so they might not understand our struggles and hardship,” said the Senoi whose greatest wish is for the Orang Asli to be given more attention.

“We are living far from others, but that doesn’t mean we should be excluded.

“We want to improve our lives and the lives of our children.

“Apart from food assistance, we wish for more facilities and better opportunities,” he added.

In August, Prime Minister Datuk Seri Ismail Sabri Yaakob in a Facebook post in conjunction with the International Day of the World’s Indigenous Peoples, had said that the government would continue the agenda of empowering the Orang Asli community so that they could enjoy economic, social and educational progress.

On July 28, Rural Development Minister Datuk Seri Mahdzir Khalid said in the Dewan Rakyat that an Orang Ash Development Policy was expected to be finalised in the fourth quarter of the year and implemented by the middle of 2023.

Mahdzir added that the policy, which would focus on matters related to land management, education, health, economy, leadership, infrastructure and culture, was aimed at boosting efforts to bring the Orang Asli community into mainstream development.

Sabah-based Indigenous People Network of Malaysia project coordinator Jenifer Lasimbang said the situation of the Orang Asli in the peninsula was very different as they were a small minority.

“In Sabah, indigenous people make up about 60% of the population,” said the former Moyog assemblyman who is glad to note that more young Orang Asli activists in the peninsula are speaking up about their rights.

“Recently, I went to a seminar where the majority of those who attended were young Orang Asli activists, including women,” she added.

“Their rights must be recognised first,” she said.