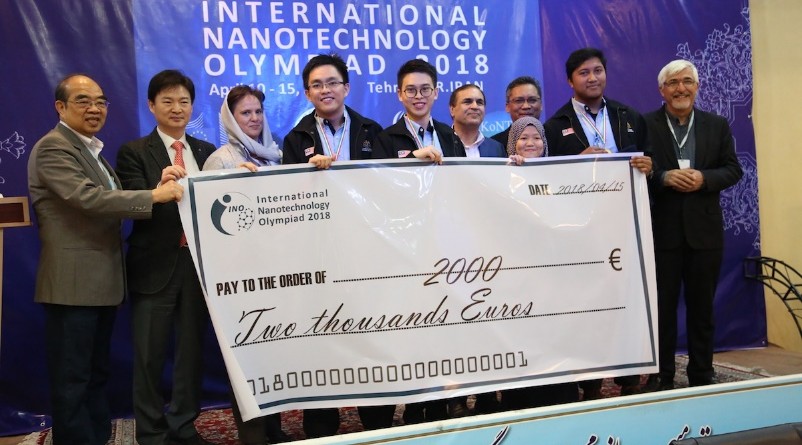 BATU PAHAT – The Malaysian team led by Rabbi’atul ‘Adawiyah Zayadi, a PhD student from Universiti Tun Hussein Onn Malaysia (UTHM) has successfully won a gold medal for the’ Science and Technology’ category at the 1st International Nanotechnology Olympiad (INO) which was held from 9 to 15 April at Pardis Technology Park, Tehran, Iran.

The Malaysian team proposed the Nano-Palm Frond Titania Fiber (Nano-PFTF) Membrane (Reduction of Methylene Blue Dye and Hexavalent Chromium) as their product. Nano-PFTF was developed based on the waste to wealth concept where oil palm fronds were used to produce cellulose acetate that was applied in the fabrication of nanofiber membranes in order to treat wastewater containing organic and inorganic pollutants.

“My friends and I are grateful to represent Malaysia and bring home a gold medal from this international scientific competition,” said Adawiyah, who is also the Secretary of the Graduate Student Association (GSA) at UTHM.

The experience gained during the ONM and INO was especially valuable to Adawiyah and her teammates as it helped to enhance their knowledge of nanotechnology and improve their soft skills. They also had the opportunity to make new acquaintances with people from all around the world.

This petite student hopes that this victory would be a catalyst for her to pursue her research and Ph.D studies at UTHM especially in the field of nanotechnology, and also contribute to the country particularly in the preservation of the environment.

Meanwhile, the gold medals for novelty, business and overall categories, were won by the South Korea, Iran 1 and Taiwan teams respectively.

This INO competition was the first activity organized under the Asia Nano Forum (ANF) and for the first time it was coordinated by the Iran Nanotechnology Initiative Council (INIC). Malaysia is also a member of the ANF and is committed to sending the Malaysian team, which is under the supervision of the National Nanotechnology Centre (NNC), the Ministry of Science, Technology and Innovation.